The Christmas month has been extremely busy for us, between school concerts, nursery plays and many other such things I sometimes felt like I was a headless chicken running from one place to another.

At the start of the month Miss H had her school Christmas concert and fair which was lovely and a great way to kick of the Christmas season.  Of course while we were there we were stopped about 100 times by people wanting to admire the twins but this has become pretty normal to us now. Getting around tesco’s/asda can be a nightmare with everyone admiring them, though I have to admit it’s lovely to see how many people think they are as cute as we do. Honestly there’s times I stare at them so much when there sitting in the trolley together I could nearly crash into the aisle’s lol 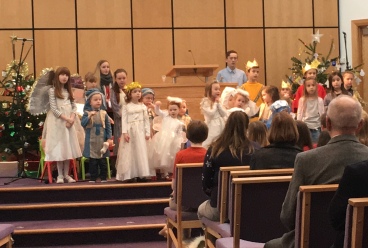 Like every year I visited the annual Christmas market in town but this year I went alone with Miss H for some girly shopping time and a few little treats. She’s really becoming very gown up now and loves her trips out with mummy. Both her and her bother were in the sunday school nativity this year which was lovely to watch as its a rare thing having both kids in something together and I have to say the both done great.

The twins got to meet santa at their baby group and have there first santa picture taken which is a great memento to have when they’re older.

Our little man done his very first nativity play in his nursery. He was dressed up as a sheep and done some awesome singing.Both hubby and I were so happy and proud to be there to see him. He seems to be doing really well in his nursery and he still enjoys going in everyday.

On Christmas eve we baked our own cookies to leave out for and santa and the kids enjoyed getting their Christmas eve box. Every year they get some lovely new Pjs and a few little treats, this year even the twins got their own little boxes.

This year we went to my mums for Christmas day which was great as it meant we could relax a bit and enjoy the babies on their first Christmas and of course have some playtime fun with the other two.

On boxing day this year I had my dad and brother down for dinner and of course hubby was trying out his new VR headset he got for Christmas.

I love spending time with family at Christmas, sometimes life can be so busy that its nice to actually all be spending some time together and making some memories.

Family Blog,willing to review anything related.